Dr Harry of Better Homes and Gardens consults Diggers Herding to help cure this car chasing border collie. Dave knows just the trick to cure her....give her a job and some herding training.

Dylan counts his way to success

Diggers Dylan shows the crowd at the Pets in the Park at Glen Eira's Allnutt Park that he still is the king of dog talent quests.

As Dylan approached the stage he took centre position and then introduced himself to the judges with a wave and a bow. Dylan now almost eleven years old displayed his many talents, including telling everyone how old he is, to take out first place at the show.

Diggers' Dogs Rosie and Dylan's sucess at Casterton has been noticed  as far as Melton. The Melton Express Courier called Geoff for a phone interview early in the week resulting in a very nice story on page 13 of the 22nd June issue. The story features a great photo of Geoff with Rosie which I feel depicts the special bond between these two.

Diggers' Herding & K9 Education would like to thank The Melton Express Courier for the wonderful story.

Their kelpies Rosie and Dylan were named champions at the recent Australian Kelpie Muster in Casterton.

"The dog has to do most of the work," Mr Burling said.

But Rosie, one of a family of six dogs, gets extra attention for her efforts.

"She's my girl. She's a little princess, the star."

Dylan the "Wonder Dog" has been mastering his "psychic" powers over 10 years to win the event's Kelpie Idol title for the sixth year in a row.

He has been trained to entertain a crowd with a range of tricks, including being able to identify the number on a card chosen by a member of the audience by barking.

The two men run a working dog training school, Diggers Herding and K9 Education, at a property on Edwards Road.

"They are loyal, they are always by your side. They are great pets and great working dogs. They are an all-rounder."

Must be something special in the water at Diggers K9 Eductaion. All three place winners were familiar faces at Diggers K9 Education. Only two weeks prior to the event they were all herding the same sheep here.

The steepest hill in Casterton, aptly named “Toorak Hill” was the site for the Kelpie Hill Climb. The place winners were;

1st Adam Ward with Aussie in a staggering 31.40 seconds

Congratulations to you guys, WELL DONE!.......maybe it's the Diggers' sheep that hold the secret, "bah ram ewe" 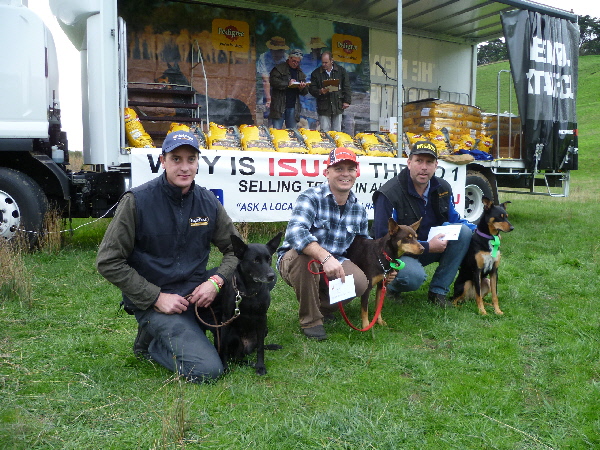 The Kelpie Idol contest allows handlers to show off  there training skills by competing for the title of Kelpie Idol. Dylan and David entertained a large crowd with there amazing repertoire of tricks. Dylan also performed an all new trick that showed that old dogs can learn new tricks. The trick consisted of a member of the audience choosing a card numbered between 1 & 4 then, without Dylan or David seeing the number, Dylan barked 3 times to indicate the number 3.

Many people were amazed and later asked how the trick was done.....lets just say that either Dyl or Dave may be psychic.

Dylan is now just over 10 years of age and loves performing for a crowd. 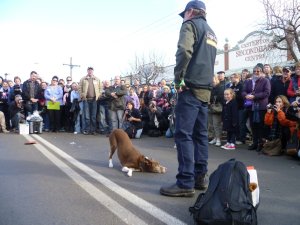 Diggers Rest’s own, Rosie and Geoff Burling win the Triathlon 1st place for the second time. Each year the Casterton Kelpie Muster hold the Triathlon Challenge, a competition made up of 3 events, the 50m sprint, high jump and hill climb. Rosie placed well in every event to earn her first place in the much coveted event.

This is the second time Rosie and Geoff have taken out the event. The last time was in 2008 which has earned her the title of not only Diggers K9 Education Queen but also Queen of the Kelpie Casterton Muster.

Congratulations to both Geoff and Rosie. 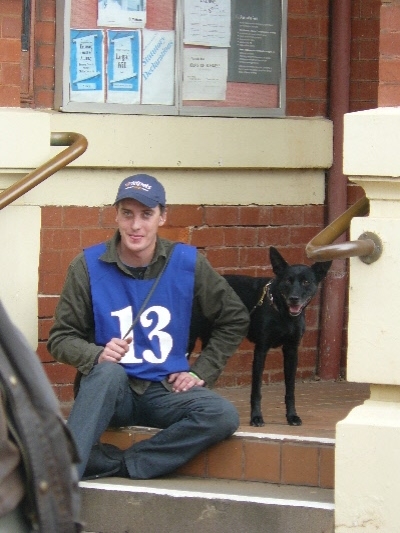 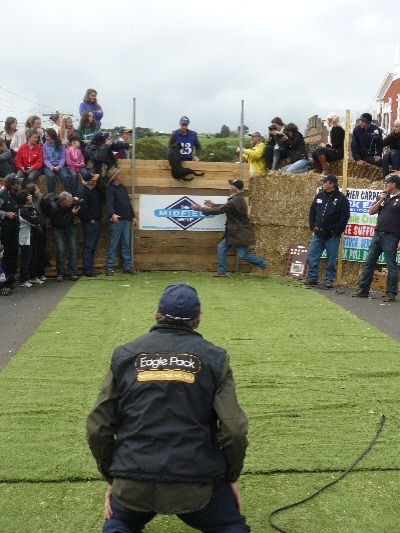 Talk To The Animals

On the 1st of May 2010 Diggers K9 Education was visited by the Channel 9's Talk to The Animals crew. Dr Katrina Warren interviewed us and even had a go at working our beloved Rosie. The show will be aired 24th July 2010 at 4.30pm. Stay

tuned to this website or the Talk To The Animals web page. 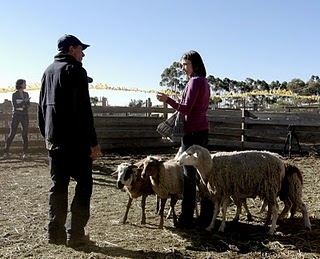 Dr Katrina Warren getting a lesson from Dave.